We have scheduled a major expansion of our portfolio for the 6th of December, when we start publishing the weekly periodical “Der Tresor” on ZEDHIA. 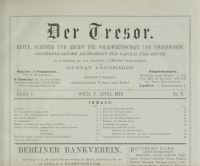 Like the “Compass”, the business weekly was founded by Gustav Leonhardt and appeared for the first time entitled “Der Tresor. Revue, Statistik und Archiv für Volkswirtschaft und Finanzwesen. Oesterreichische Zeitschrift für Capital und Rente.” (The Safe. Review, statistics and archive for economy and finance. Austrian periodical for capital and pension.”) on 7 April 1872. The publication was originally intended as a weekly supplement for the Compass but very quickly developed a life of its own with lively content.

The reporting focused on Austro-Hungarian stock companies and government securities. There were regular and highly detailed financial, statistical and economic analyses as well as in-depth reports on economic and political developments in Austria-Hungary and around the world.

The Tresor, with its weekly reporting, offers an ideal addition to the content of the Compass volumes of those years.  The last edition of the Tresor appeared in 1919.