We are glad to be able to announce a large addition to our inventory for 2020: Compass Verlag is planning to publish the German Imperial Gazette (Deutscher Reichsanzeiger) on ZEDHIA in the coming year. The preparatory work is planned to start at the beginning of the new year. 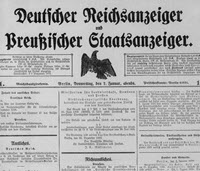 The German Imperial Gazette and its predecessors such as the Prussian State Newspaper (preussische Staatszeitung) appeared from 1819 until 1945. Publication of the German Imperial Gazette will enable users to make comprehensive searches for German corporate and economic data up to the end of the World War II. The Imperial Gazette like the official gazette section of the Wiener Zeitung (Amtsblatt zur Wiener Zeitung) contains entries about company formations, changes and deletions and many other publications relevant to economic history.

You will be notified on the ZEDHIA blog or in the news as soon as we are able to announce a date for publication on ZEDHIA.